Crown of Armello is a King's Treasure Card. The card symbol is a Wyld, however, this card cannot be burned in Combat or Perils, as it is exclusive to the King.

Wearer is the Ruler of Armello and never Retreats from Battle.

From the golds of The Four, a new crown formed on Wyld's trunk, for a new king, a new age.

Being both a Royal Card and a King's Treasure Card, Crown of Armello is available only to the King in terms of Equipment. As such, it cannot be drawn from the three main decks, won in Quests, or obtained through Dungeon exploration.

Besides being special in its unobtainability, the Crown of Armello has no profound effect on gameplay itself. It acts as it should, carrying out its Action appropriately when needed and acting similarly to almost every other equippable card.

The Crown of Armello bears an interesting Steam Achievement: The Fresh Prince, in which the hero must steal the King's crown using the Mirror Cape and use it against him in Battle (it has no combative effect). This achievement can be a bit difficult, as getting the Mirror Cape in the first place is most likely the hardest part.

Crown of Armello artwork featured as a background for v0.3.5. 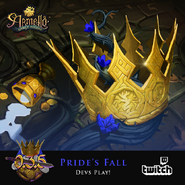 Crown of Armello artwork featured on a Pride's Fall Dev's play for Twitch.

Retrieved from "https://armello.fandom.com/wiki/Crown_of_Armello?oldid=7795"
Community content is available under CC-BY-SA unless otherwise noted.