"A kid genius who's as resourceful as he is excitable!"

Barnaby (Screwloose) is a playable Hero and member of the Rabbit Clan. He is the second Rabbit introduced, one of the first four DLC characters revealed during the Armello Kickstarter campaign.

Barnaby is a tan rabbit clad in a suit of gold plate mail, complete with a great helm and over-sized gauntlet on his right paw. He carries a large great hammer, along with a backpack filled with various items including a lantern.

Barnaby's unique hero ability is Tinkerer: When Barnaby equips a new Item Card over one he already has equipped, the old card is returned to his hand with the cost/gain removed.

Tinkerer allows Barnaby to switch between a variety of Item Cards without losing them, adapting his equipment bonuses for different situations. 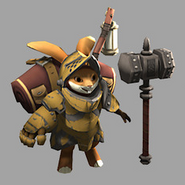 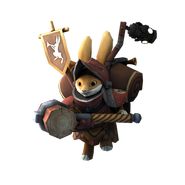 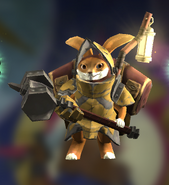 Barnaby on the Choose Hero screen

Retrieved from "https://armello.fandom.com/wiki/Barnaby?oldid=7756"
Community content is available under CC-BY-SA unless otherwise noted.